The world of advertising has not just expanded but has seen varying significant over the years. The Publishers wish to maximize their earnings and advertisers want to maximize their return on investment. The major challenge is to get the user’s attention. To look for the right forms of lead collection and monetization methods on one’s blog is not just a tedious task in itself but also very essential. One does not just want to get a good amount of money through the audience but the idea is to retain the same audience too and the best plausible way of accomplishing the same is if they get their email address or permission to send push notifications and also deliver to them great value or service in the process. Good enough that Megapu.sh is now available, which is a new ad network with a very original twist for it is the very first ad network that allows you to send ads with push notifications. If you are an affiliate marketer, you must constantly be looking for new, creative, and effective ways to optimize your campaigns then Megapu.sh is just what you are looking for. It is a great tool to engage readers and drive new people to your site. Not only does Megapu.sh provides more control over your ad campaigns than most other networks. Let’s take a look at Megapu.sh.

The Future of Push Notifications 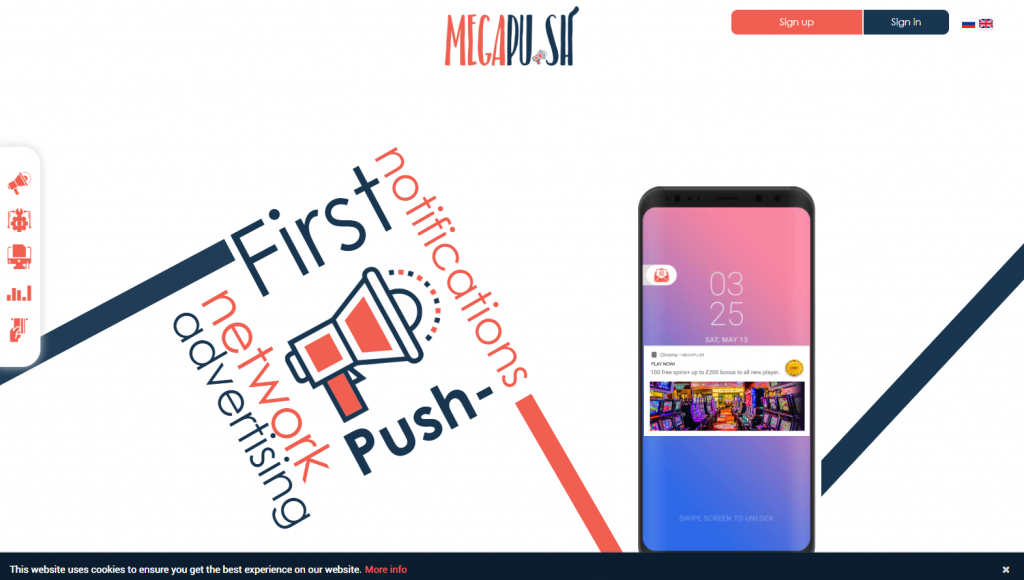 A push notification is a message that pops up on a mobile device. App publishers can send those whenever and users don’t have to be in the app or using their devices to receive them. They are used for a couple of things for example, they can show the latest sports scores, get a user to take an action, such as downloading a coupon, or let a user know about an event, such as a flash sale. However, for the users now, Push Notifications, have become annoying, and as per the future, it depends on the brands the advertisers make use of and the purpose of the same. So has been happening that the advertisers should treat the power to communicate directly with our apps users using push notifications, as a privilege and definitely not as a right. No matter what happens in future, an increased focus on creating useful and relevant notifications for your users will undoubtedly be central to a winning strategy. But if it delivers irrelevant notifications, not only will one lose interest, but the method as a whole, will cease to exist. So, one can say that the future of the same lies in the hands of us and you.

Getting started with Megapu.sh is quite easy and consists of just a single page, where all you have to do is enter basic information like the campaign name and target link, as well as upload the image, set your target country, enter your CPC bid and so forth. What you bid as your CPC amount will vary considerably based on the geographic location that you are trying to target. India has the average CPC of just 0.3 cents even though it is the country with the most volume at the moment, and the average CPC in Russia is 8.9 cents, it’s 1.3 cents in Turkey, 6.1 cents in Kazakhstan, and 0.2 cents in Egypt. Prior to the configuration of the campaign, and submitting it for approval, there will be a moderation process which is really efficient and fast, and said to be completed “within 30 minutes from the date of sending the campaign” during regular working hours, which are 8am to 11pm (GMT+3) Monday to Friday and 8am to 5pm (GMT+3) on Saturday and Sunday. Megapu.sh offers a straightforward user dashboard, which is pretty similar with what you must have noticed with other ad networks too. The main page displays your main statistics, including the number of clicks and the amount of ads spend you’ve had today and during the month. This consolidates all the data across all your campaigns and is pretty convenient too. Before the main bar graph, information about the day before’s top 10 campaigns and the top campaigns overall, showing the number of clicks, targeted country and total cost is displayed. Next to this, they have lists of the top 10 active countries for campaigns across the network, plus the top 10 free across  the network. Not just that, there is a bonus system in place based on the amount of your deposits. Putting $500 earns one a point, for example, while putting in $5000 gets one 20 points. Each MP is worth $15 in ad budget, but you must exchange a minimum of 10 MP at a time. Also, the referral program offers a generous 7% commission of the total payment by a partner that you refer to MegaPu.sh.

How to Create a Campaign with Megapu.sh

The process for setting up a new campaign in Megapu.sh consists of just a single page. Just click on “new campaign” in the left sidebar. After that, you’ll need to upload the primary image (492 x 328 pixels) and the icon (192 x 192 pixels) for your campaign. There don’t appear to be any specific guidelines for file format here. I used PNG and JPG files and had no problem. You will need to resize them to the right dimensions though. Below that you’ll find all your targeting options, like country and browser, as well as your CPC bid in cents. In other words, a bid of 0.1 is equal to $0.001 or 1/10th of a penny per click.

When you select a country, you will be shown the minimum price and the average price for that geolocation. Understandably, some countries are more expensive than others. The average bid in Canada was about 5 cents, whereas the average price for Albania is just 0.3 cents. Your mileage may vary. Below this is an option to select a start and end time, define an IP range, and choose between five networks: MegaPush, AdMaven, AdSterra, PropellerAds and Advexxx. 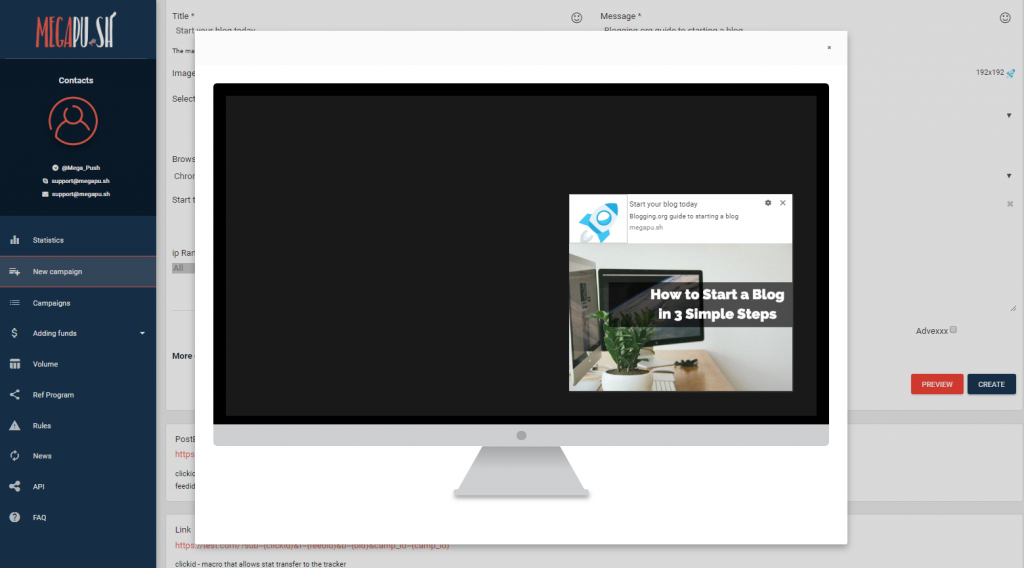 Click on the red “preview” button and you’ll be shown what your push notification ad will look like when deployed. Click on the blue “create” button and your campaign will be submitted for moderation. And that’s it. Once your ad is approved, you can check up on its stats, group it with other campaigns, top up your budget, and so on.

Push Notifications are very beneficial and especially Megapu.sh has some really good ones. Not only does it bring traffic from all countries but also allows you to set all the details like OS/ platform/ country/ browser/ ISP. With the minimum price per click being 0.001 $, and the system being based on CPC model, Megapu.sh has moderation and support available for 24/7. It has near about  12 million clicks per day. The given were just to name a few but rest assured, it is a good way to remind your users about your brand and put yourself on the map.

Push Notification Networks have been booming for they are immensely beneficial. However, it has not taken Megapu.sh long to make a mark with its quick results and effective working. It certainly is a great way to remind existing customers about your product or services and also, has a very original twist. It will prove itself as very helpful to you, if you are a blogger and aim to not only keep the audience that you have but also draw new ones. All in all, it is for the good at the present.
[quick_offer id=7577]